A novel approach to the absurdities of mass desolation.

Woke Up Lonely by Fiona Maazel

We are lonesome animals. We spend all life trying to be less lonesome. One of our ancient methods is to tell a story . . .

—John Steinbeck, to the Paris Review

A Google search for the term lonely can yield 287,000,000 results in less than twenty seconds. A Facebook Community called “Loneliness” has close to 19,000 Likes, while over 15,000 Likes appear on a Facebook Interest page with the same title. It looks like Fiona Maazel really struck a chord with this literary theme in her second novel.

The cover, with its iconic backlit image of a concert crowd wave, pulls the reader right into the anomie awaiting inside the book. When a writer as proficient as Maazel collects intriguing ideas—such as global eavesdropping in the middle of the Pisgah National Forest, the juche idea of the spirit of self-reliance in the isolated nation of North Korea, the secret world of subterranean Cincinnati, the lure of cults, and the psychology of loneliness —and combines them all into a plot that is at the same time wildly comical and perceptively forlorn . . . well, you’ve got yourself a rollicking good read.

Some authors can make you laugh out loud. Others wrench tears right out of you. Maazel blends those two abilities in a startling yet subtle way—at least for me. While reading Woke Up Lonely, I would on occasion be aware of a riotous laugh heading straight up my throat, only to be met by an equally powerful lurch of my heart just before the hysterics breached my lips. The effect muted what was about to become a loud guffaw by curtailing the initiation of tears into a sharp intake of breath instead, infusing me with a unique sense of poignant hilarity. Maazel’s artistic skill in smudging the demarcation between comedy and angst left me shaking my head in admiration time and time again.

Her first novel, Last Last Chance, also touched upon disparate societal issues viewed from an absurdist eye with acuity. I would place Woke Up Lonely in a special fiction genre, however, possibly also comprised of Atmospheric Disturbances by Rivka Galchen and Special Topics in Calamity Physics by Marisha Pessl.

The protagonist in Woke Up Lonely inspired opposing feelings in me as well. I found Thurlow Dan, known as Lo, at once both despicable and endearing. Lo is the founder of the Helix, a cult followed by throngs of lonely people. He, too, is aware of his emotional remoteness while missing his former wife, Esme, and their daughter, Ida. It’s been a decade since he saw them—and then suddenly he does.

Avid readers of Boris Pasternak will recognize the riff on a scene from Doctor Zhivago as the novel begins. Thomas Hardy aficionados may pick up on another from Tess of the d’Urbervilles at the book’s end.

The author employs a technique for revealing Esme’s backstory by having the character number the pages of a speech she’s preparing about her early life. Unbeknownst to Lo, Esme’s job has involved spying on her former husband. One of their most hilarious scenes together takes place in a limo driving through Pyongyang, DPRK, told at different points in the novel as each of them experienced it. Esme’s disguised professional vantage point over the years has allowed her to protect him covertly as she became aware that she still cared for him. Then Lo throws her a curveball by taking her agents hostage. These four spies are vividly drawn quirky characters with mind-boggling individual story lines of their own.

In explaining the reasons why people behave in unusual ways, social psychologist Elliot Aronson noted his “first law” in The Social Animal, published in 1972 and now in its 11th edition: “People who do crazy things are not necessarily crazy.”

Later, in his 2010 memoir Not By Chance Alone: My Life As a Social Psychologist, Aronson wrote: ““In this society most of us glide through life protecting ourselves; in effect, each of us wears a behavioral suit of armor, to minimize how much other people can hurt us. But sometimes we become so successful at hiding our true feelings from others that we hide our feelings from ourselves as well.”

Woke Up Lonely strikes me as a literary exploration of these very ideas. Maazel juxtaposes ribald incidents next to analytical explanations of how loneliness differs from anxiety and depression with a deft and sure hand. She draws attention to the distinctive features of individualism and collectivism within a society as they relate to loneliness.

Neuroscientist John Cacioppo, coauthor of Loneliness, has spoken widely about such concepts. Cacioppo stresses that loneliness is not a bad thing because it compels us to form connections. “Loneliness is a cue to us to reconnect, like a prompt,” he says. “Individualism is celebrated in our culture. The underlying collective is not recognized.” According to Cacioppo, the symptoms of loneliness are: “(1) You don’t have a confidant who confirms who you are. (2) You don’t have a collective identity, a social identity.”

And that’s right where Thurlow Dan’s Helix cult snags so many lonely people in Maazel’s novel. I was briefly confused a couple times amid shifts from first to third person and in the description of several characters, but never did they mar the framework or flow of this modern tragedy with its intelligently subtle humor. Maazel masterfully couches editorial observations about our culture within the dialogue of her creatively sketched characters. On page after page, I thought in bemused wonder, “How did she ever dream up these folks?”

I picked up some insights when I heard Maazel speak recently at the New Fiction Confab in Austin, Texas.

“I write because I enjoy it,” she said. “I don’t know how to do anything else but fiction writing. It’s lucky if you get to do what you love.”

She doesn’t hold stock in the old adage “Write what you know.”

“Write what you can learn about,” she said. “It teaches you about your inner life. If you’re a person who finds it difficult to confront your inner life, writing is a way to do it.”

She advised writers to “be available to the world around you. It teaches you. I use no headphones or iTunes. I use the subway to be a keen observer. Let the stories come to you. Refract them through your own consciousness.”

Afterward, I asked her how many drafts she wrote of Woke Up Lonely before it was published.

“Oh, about forty-six,” she replied seriously. “There’s no ‘would-be’ about being a writer. You’re either a writer or you’re not.”

Fiona Maazel is definitely a writer. 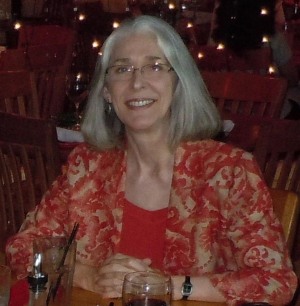 Lanie Tankard is a freelance writer and editor in Austin, Texas. A member of the National Book Critics Circle and former production editor of Contemporary Psychology: A Journal of Reviews, she has also been an editorial writer for the Florida Times-Union in Jacksonville.

6 responses to “Fiona Maazel on loneliness”