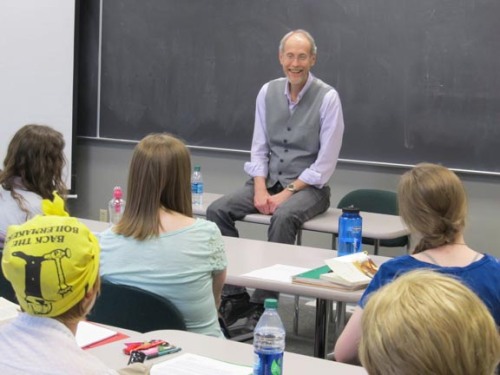 “Write what you don’t know”: Lee Martin, speaking to my class at Otterbein University, April 9, 2013.

Celebrated novelist & memoirist discusses how he became an artist.

In the beginner’s mind there are many possibilities; in the expert’s mind there are few. . . . This is also the real secret of the arts: always be a beginner. Be very very careful about this point.— Suzuki Roshi, Zen Mind, Beginner’s Mind 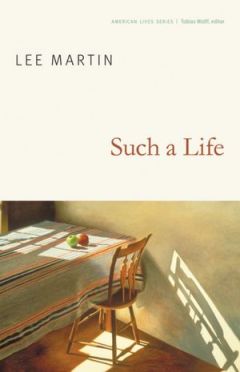 A masterpiece of memoir & personal essay

I’m trying to learn from Lee Martin whenever and however I can, as a writer and teacher. I haven’t yet made it to his celebrated fiction—one of his novels was a finalist for the Pulitzer Prize—but I’ve read just about all of his nonfiction. His recent collection of linked memoir essays, Such a Life, is on my creative nonfiction favorites page, but it’s also on my private list of touchstone artistic works. Yes, it’s that good.

Such a Life is my personal textbook on how to write stand-alone memoir and personal essays. That’s how I’ve been using it this semester, in fact, as a textbook, reading it for the third or fourth time with a group of twenty junior and senior college students. The kids love the book, are fascinated by its stories, which are about Martin’s tumultuous growing up years and his middle-aged dilemmas, and some mix those two time periods. I pat myself on the back for choosing Such a Life and for starting my students off with its “Never Thirteen,” one of the most beautiful and affecting essays I’ve ever read, about Martin’s relationship with his first girlfriend. After reading that essay, my students were hooked. They’re still close to their first crushes, after all, and they found Martin’s depiction of the tenderness of the young sweethearts, set against the sour adults around them, thrilling and surprising. I think they’d never read anything like it.

Just as some fiction writers say they’ve typed up Ernest Hemingway’s short stories to learn to write, one of these days I’m going to type up “Never Thirteen.” Having already reviewed the book, I won’t go into more detail about Such a Life here, except to say that Martin is a master at exploiting the enriching advantages of the memoiristic dual narrator—him “then” as a character in the action, him “now” stepping in to comment—and at writing essays that, simply put, are interesting. When he graciously came to my class last night to speak with my students, in answer to one’s question about how he knows his family stories will be interesting to anyone else, Martin said, “If it interests me, I figure it will interest someone else.”

But that’s the end of his long answer and therefore misleading. He told my class he works on an essay for about three months on average; he’s exploring, discovering the whole time, working without a net, no outline (though he plotted during his long apprenticeship); when he writes he doesn’t picture a reader he’s confessing to or entertaining but feels he’s having a conversation with himself, with the different parts of himself. In this regard, one of my favorite quotes about nonfiction comes from him, writing on his excellent blog:

In an essay, I’m always interested in the opening to see what the writer wants me to pay particular attention to, and often that ends up being the layers of the persona which are in conflict with one another.

All semester, my students have been fascinated by Martin’s openness, by his willingness to reveal things that make himself look bad, and a couple asked about that last night. He pointed out that that’s his past self, that we all have faults and have made mistakes. When you portray other people in nonfiction, he said, you are inescapably going to write about their faults, so you’d better write about your own. Besides, he said, he forgives his younger self, or at least views him with some wisdom, from time and age. He writes about what perplexes and bugs him, past and present, testing possibilities and moving toward an understanding he didn’t have. “Write what you don’t know,” he told my students. A good example is Martin’s essay in The Sun, “No Ears Have Heard,” which was spurred by an incident Martin witnessed while waiting to check out at Wal-Mart and grew into an evocative portrayal of the hidden burdens people carry.

Martin told me that it took him twelve years after earning his MFA to pull all elements of craft together and to grasp the intangibles. Where does he stand in a fictional piece with a first-person narrator? How can he view life with Flannery O’Connor’s “anagogical vision,” which means seeing “different levels of reality in one image or one situation”? He said Richard Ford’s famous short story collection Rock Springs helped him find and free his voice. And along the way he learned with help from Charles Baxter’s Burning Down the House: Essays on Fiction that a story is not just about a conflict or its resolution but about something else that, by the end, is rising. Call it implication, perhaps, in part. Martin’s persistence and study resulted in his first book, a collection of short stories, The Least You Need to Know.

As he explains in his most recent blog post:

This writing business takes a thick skin, persistence, a willingness to fail, to listen to why I failed, to figure out a way to not fail again while at the same time accepting that I will. Developing as a writer takes an intelligence, an ability to look at one’s work as if you’re not the one who wrote it, an acceptance that there are other writers who know more than you do, who are more talented, who are farther along. Steal from them whenever you can.

It took me six years to begin to answer these questions for myself:

1. From what world do I wish to speak? (the small towns and farming communities of my native Midwest)

2. What’s my material? What am I obsessed with? (issues of violence and redemption, the consequences of deceit and betrayal, the blending of the moral and the profane)

3. How is the person, Lee Martin, connected to the writer, Lee Martin? (I spent my adolescence balanced on the thin line between my mother’s compassion and my father’s cruelty; it finally struck me that everything I wrote was in some way an attempt to navigate that boundary.) 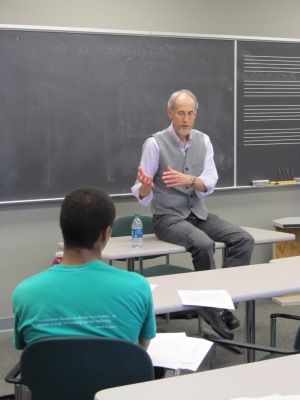 I asked my students what they thought of Lee Martin after meeting him in person rather than just through the page. “He’s so soft-spoken,” one said—a few may have been concerned, after the darkness of some of his stories—“but he’s funny!” Yes, they agreed, he’s funny. He’s a lifelong teacher, and by all accounts a great one, so I must’ve expected humor to be part of his quiver of tools. Beyond that, he was funny like a Zen master is funny, which seems to involve laughing through well-dried tears. But they saw that too, my students.

The medium was, in the end, the message. Isn’t it always? Martin revealed himself in tangible and intangible ways—through his craft advice, his candor, and his persona, at once crafty, wry, and sincere. Through great effort, he’s made himself into an artist. Maybe that’s no more rare or precious than becoming a successful businessman or “learning to think like a lawyer,” though of course to me it is. And it was to a classroom of students, here at Otterbein University, who’ve been touched by his art.