Junot Díaz: Voice of a genius

Holding up a mirror to society through narrative.

This Is How You Lose Her by Junot Díaz

“I stand in for the absolute silence in our communities.”—Junot Díaz 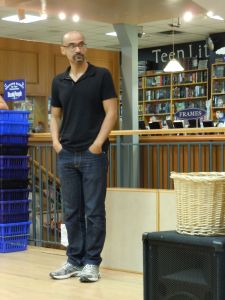 Will Junot Díaz add the National Book Award to his shelf of literary prizes? He’s one of five fiction finalists for the honor to be announced on November 14. Díaz has already scooped up so many awards, however, that he’s a star even if he doesn’t win tonight.  The event will be streamed live beginning around 7:15 p.m. at www.nationalbook.org, so invite some friends over for an awards party and cheer on your favorite author.

I heard Junot Díaz in Austin, Texas, on the recent tour for his latest book, This Is How You Lose Her, a collection of short stories. A few days later, his creativity was given literary license by the MacArthur Foundation, whose website notes the organization is “committed to building a more just, verdant, and peaceful world.” Every year, it awards fellowships of $500,000 each with “no strings attached,” often referred to as genius grants.

Díaz works out of his own immigrant experience. Born in the Dominican Republic, he was raised in New Jersey. The most well-known character in his writing has been a young man named Yunior de Las Casas, and Yunior lives again in most of the stories of this new book. Yunior’s voice is unique. It is arresting. It is angry. It’s vulgar and chauvinistic. At times, it’s laugh-out-loud humorous. It’s also eloquent.

Díaz assigned Yunior difficult duty in his books, asking Yunior to bear witness to horrific events in the history of the Dominican Republic while also serving as narrator for tales of immigrants in the United States. It’s a daunting task. Under the guise of womanizing, Yunior keeps an eagle eye on how the diaspora has scattered their culture across a new country, diluting and diminishing it in the process. Throughout the tales in this current tableau, Díaz has Yunior chronicle the treatment of his people by the citizens of this country. When one reads these stories of love and loss on a different level than one-to-one relationships, the pain of humanity is right there staring you in the face.

Díaz told the Austin audience, “Yunior is an incredibly useful metaphor for me to dive into the topic. He’s part of a larger project of a novel about race. Race is just a part of it.” Díaz referred to “all these silences we’ve built in,” adding “Yunior is an excellent character for me to use to get into them. He’s dead-on smart about what’s going on. He’s at the heart of what’s going on.”

A female character named Yasmin, however, upstages Yunior in the centerpiece story called “Otravida, Otravez.” Yasmin’s quiet rendition of her narrative is powerfully arresting, and moved me to tears. As Yunior did for Oscar Wao, Yasmin becomes the narrator for the tale of another woman named Anna Iris. Díaz hinted to his Austin listeners that he was thinking about developing the story of Anna Iris in future work. I hope he uses Yasmin’s voice to tell it, because her life is equally fascinating.

One yardstick for measuring a writer’s strength is the ability to develop more than a single voice. The appearance of Yasmin confirms Díaz is not all Yunior. And that’s important, because Yunior and other male characters dominate so many of the tales in this latest book that it took me a while to realize who was narrating “Otravida, Otravez.” When one reads the story as a stand-alone piece, as it appeared originally in the New Yorker in a slightly different form, that understanding is not tethered to the dominant characters in the other stories nearby.

Another yardstick could be the question: Do a writer’s characters grow and change? Yunior’s attitude toward women, first articulated in the 1997 collection of stories titled Drown, has matured through the 2007 novel The Brief Wondrous Life of Oscar Wao into a mellower and more reflective self-analysis in This Is How You Lose Her. Díaz employs contemporary references such as “Neuromancer dreams,” á la William Gibson, when Yunior realizes too late (as did Gibson’s Henry Dorsett Case) that he loved his former girlfriend only after she was gone. 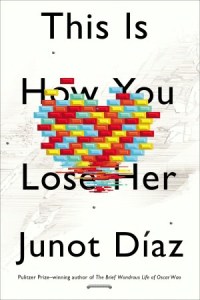 A resilient oral tradition can reflect the history of a people in much the same way as songs. When you lose someone, there are varying feelings of loss, bereavement, defeat, forfeiture, and hurt. Anger is also a basic component of bereavement. One can sense these same emotions on the collective level about problems in society, and that is what it seems to me Díaz is trying to capture. Charles Dickens used literature to illustrate difficult societal conditions through marginalized characters. Writer William Saroyan cast an early spotlight on immigrant communities in America, creating scenes (particularly in his short stories) that surmount the confines of countries and portray broad themes applicable to all.

Junot Díaz advised his Texas gathering, “The agony of social conditions only diminishes when you’re helping someone else. If you have a broken ankle, help someone burned from head to toe.”

Díaz weeps for the loss of love as he explores our universal humanity in This Is How You Lose Her. Think about that title for a moment. Is the “her” possibly Lady Liberty herself? Perhaps Díaz penned an editorial in literary form, crying out, “Heads up, America.” As his character Yasmin observed, simply and quietly, “This is what I know: people’s hopes go on forever.”

Whether he wins the National Book Award or not, Junot Díaz is a magnificent writer.

Lanie Tankard is a freelance writer and editor in Austin, Texas. A member of the National Book Critics Circle and former production editor of Contemporary Psychology: A Journal of Reviews, she has also been an editorial writer for the Florida Times-Union in Jacksonville.

9 responses to “Junot Díaz: Voice of a genius”