An American Childhood by Annie Dillard 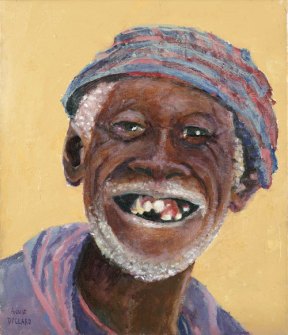 Dillard's recent "A Happy Man" from her website, http://www.anniedillard.com/drawings-paintings.html

. . . Throughout all these many years of childhood, a transpired sphere of timelessness contained all my running and spinning as a glass paperweight holds flying snow. The sphere of this idyll broke; time unrolled before me in a line. I woke up and found myself in juvenile court. I was hanging from crutches; for a few weeks after the drag race, neither knee worked. (No one else got hurt.) In juvenile court, a policeman wet all ten of my fingertips on an ink pad and pressed them, one by one, using his own fingertips, on a form for the files.

Turning to the French is a form of suicide for the American who loves literature—or, as the joke might go, it is at least a cry for help. Now, when I was sixteen, I had turned to the French. I flung myself into poetry as into Niagara Falls. Beauty took away my breath. I twined away; I flew off with my eyes rolled up; I dove down and succumbed. I bought myself a plot in Valery’s marine cemetery, and moved in: cool dirt on my eyes, my brain smooth as a cannonball. It grieves me to report that I tried to see myself as a sobbing fountain, apparently serene, tall and thin among the chill marble monuments of the dead. Rimbaud wrote a lyric that gently described a man sleeping out in the grass; the sleeper made a peaceful picture, until, in the poem’s last line, we discover in his right side two red holes. This, and many another literary false note, appealed to me.

I’d been suspended from school for smoking cigarettes. That was a month earlier, in early spring. Both my parents wept. Amy saw them weeping; horrified, she began to cry herself. Molly cried. She was six, missing her front teeth. Like mother and me, she had pale skin that turned turgid and red when she cried; she looked as if she were dying of wounds. I didn’t cry, because, actually, I was an intercontinental ballistic missile with an atomic warhead; they don’t cry.

Why didn’t I settle down, straighten out, shape up? I wondered, too. I thought that joy was a childish condition that had forever departed; I had no glimpse then of its return the minute I got to college. I couldn’t foresee the pleasure—or the possibility—of shedding sophistication, walking away from rage, and renouncing French poets.