I read Bill Roorbach’s memoir Temple Stream: A Rural Odyssey a couple times last summer. I’d been impressed with his review of my memoir for a prospective publisher, and hired him to line-edit a draft of it. Bill is a novelist, an award-winning short story writer, an essayist, the author of a popular how-to book, Writing Life Stories, the editor of a creative nonfiction anthology, and most recently a blogger.

On my first readings of Temple Stream, I don’t remember consciously noticing what really jumped out at me on my recent third reading, probably because not long ago I’d noticed he does it on his blog: an unusual sentence construction, sometimes technically ungrammatical, that’s wonderfully visual, poetic, and colloquial. I may steal it, if I can, to enliven my own prose.

“Leaves blew down the road, forlorn.”

On the one hand, this is just hanging a strong adjective off the end: “He fell back, wounded” is an example. But Bill tweaks it. This literally says leaves (the subject) were forlorn, but placed next to “road” the word implies the road was forlorn, too—achieving the effect of typing the entire scene: the effect of the leaves blowing down the empty road was forlorn. That elaboration is perfectly clear, but twice the words and half the poetry of Bill’s sentence.

It was strange as I wrote this post to stumble across, in the New York Times Book Review of March 27, a criticism of this same “syntactical short cut” in Ward Just’s new novel Rodin’s Debutante. The reviewer called Just’s move “presumably a side effect of his laudable economy of style but one that creates grammatical ambiguities.” Just’s sentence: ‘She began to describe her studies, utterly fascinating.’”

Very Bill Roorbach-like, that. The construction has an offhand quality, emphasized here in another of Bill’s Temple Stream sentences:

“This dour presence and I gazed at each other through the bubbly old windows until I pointed at the porch door, where I met him, holding Desi and Wally by their collars as they clamored sniffing and snorting, Desi with his back up, theatrical growling.”

Grammatically that would be theatrically growling. But again, it’s a flash of imagery, auditory in this case, in the emphasis spot. It hovers over the whole hectic scene and captures it. Bill’s usages eliminate words, often while implying much more with a dying fall:

“And he described again the dense woods he’d found there, days gone.”

And with a dying punch:

“I say, ‘Okay, boys,’ and the dogs leap out, investigate every hump and knob of snow, piss amply on a pair of spectral snowmen—the ghosts of millers no doubt—while I retrieve my skis from the back of the truck, get them attached to my boots in a rush of bare fingers, painful.”

Again, this allows him to end on a strong word, but also to employ an odd, interesting pattern. And I feel the cold pinch keenly. At least one reviewer of Temple Stream on Amazon noted the book’s delightful wordplay—especially the occasional funny unusual word—and this is part of that, higher order stuff.

Here’s two in a row, perfectly grammatical, and again putting the emphasis on the strong ending words:

“She must have walked down to the stream sometimes to think, grief-struck. Her parents’ house burned down about the same time, more sorrow.”

In the first sentence I might reverse it, except the adjectival modifiers placed where they are seem to surmount the fact they’re otherwise inescapably ordinary, and the paired rhythm is nice. Overall I like this emphasis placement better than poet Mary Karr’s striking construction that appears occasionally in her recent memoir Lit: “Freaked, he was,” to make up a likely example; anyway, hers often stopped me. But Bill doesn’t over-use his pet—not much more in the 300-page Temple Stream than I’ve culled here for the blog—and his construction probably devolved from poetry, too, come to think of it. Even the writer of prose had better be after poetry.

Here’s a Roorbach variation with implied words and also what amounts to a comma splice because of the missing words:

“The day had grown balmy, nice breeze from the west.”

As an aside, I always admire writers who use intentional comma splices well, even if I seem unable to bring myself to do it—partly out of craven conformity, no doubt, and partly because I’m so hard on students who splice unknowingly. Oddly, in that same book review noted above, in a piece on the novel Seven Years, the reviewer said that its “conscientious translations even maintain the comma splices that occur regularly in German but appear as grammatical errors in English . . .” Who knew the Germans merely spliced anything?

“The Temple entered at a turn before a stretch of real white water, entered flat and deep, a lost lagoon stained golden black with leaf tannins, strong current.”

“Outside the wind blew, frosty night.”

A variation is to use these descriptive, modifying bursts in the middle of sentences:

“In her note back, fierce handwriting, Professor Mills declared I was the one who was obscure, and how about that?”

“He shook the fearsome ax at me, brandishing it with one hand, enormous strength, admonished me in a low rumble . . .”

Or Bill uses these visual bits to come rushing at the end, the classic additive sentence:

“The road dipped down, and down a little more to where it crossed the watercress brook, which we found flowing with authority through its galvanized pipe under the road into cattails and ice knobs on sedges, sandy bottom, gold glints of mica, hearty flow, jubilant babble of bare languages, washed rocks cased in ice.”

And here tumbling after a short declarative start and fetching up against an arresting detail on a ninety-degree Maine day: 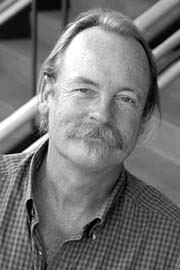 “He was enormous, wide beard untrimmed, two streaks of gray in it, thick mustache that fell over his mouth, flannel shirt, top button ripped, thermal-underwear shirt beneath despite the heat, massive shoulders, massive arms, massive hands black with engine grease, massive chest pressing the bib of a huge pair of Carharrt overalls, legs like tree trunks, big leather shoes that looked to be shaped by a chain saw, unlaced, heavy rawhide dangling, one pant leg rolled up showing long johns.”

I sent all the above this to a friend and he said, “Anyone who can write as well as he does can do whatever he wants to with the English language because he’s inherited the poetic license Shakespeare, Faulkner and Joyce had.”

He added, “It seems very masculine to me, authoritative. It’s a highly conversational style and these seem to me confidential asides to the reader, sort of ‘Between you and me that dog’s growling was purely theatrical.’ Or, ‘Let me tell you something, the way he shook that axe in just one hand showed he had enormous strength.’ Except he’s figured out a way to do it without the verbiage. I bet it’s a colloquial idiom wherever he came from. I’m definitely going to read the book, strong stuff.”

See, it’s catching. I’m not a grammarian or a literary critic and don’t pretend to be, but find this usage interesting and effective: visual, telegraphic, emphatic, colloquial. I plan to try it myself very soon, diligent student. 🙂